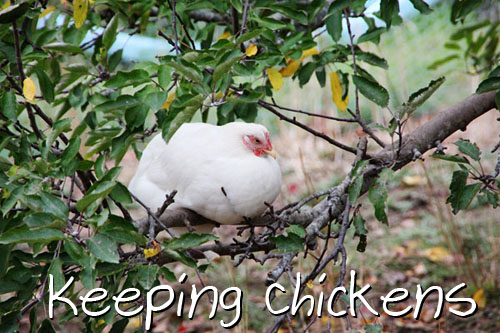 I would normally cover housing chickens before writing about what to feed them as logically you need housing before you can get chickens. But this week has been insanely busy, and this post was almost finished, unlike the not even started housing post! Even as I type, I'm typing through Ember [Little Miss Pickle!] trying to drool my face off and escape out my arms! Why am I not an octopus with 8 arms? Would  make blogging with a 6 month old a lot easier!

Anyway, sidetracking a little there...


When it comes to feeding chickens, everyone does it differently. There isn't really a right or wrong way, just what works for you and your flock.

I've put together a basic list of things that you can feed your chickens, you don't need to feed them all, except of course water and either a pellet and/or grain as their main food.

Pellets
Probably the cheapest and most convenient way of feeding chickens. It's crushed up grains mixed with vitamins and minerals, along with some other stuff and put into pellet form. Most chickens will eat them...eventually.

I would point out here, that most pellets you buy DO contain animal products. So if you have issues with the use of animal by-products I'd avoid using pellets.


Grain
Often comes in a variety of mixes and single grains. The grain mixes are better than feeding a single grain, as there is more variety and balance nutrient wise. Grain mixes can be fed as the main food source, with pellets or as a treat. Just be aware that if fed with pellets some chickens may start only eating the grains and leaving the pellets.


Mash
A basic mash is pellets and sometimes grains soaked in water to form a mash, other mashes may contain other beneficial things like yoghurt or garlic. Often served warm to chickens in the morning, some believe it encourages them to continue laying through the winter. Mash doesn't keep long and must be replaced each day to avoid contamination and bacterial growth that could make the chickens sick.

Personally I have never fed my chickens mashes due to sheer laziness on my behalf.

Fresh Greens
Chickens love foraging through freshly picked greens. It can be anything really, grass, weeds, silverbeet, vegetable plants past their usefulness. Just make sure the plants aren't poisonous and haven't been poisoned. Long green grass can cause crop impaction in some chickens. To avoid the risk, cut the grass up into shorter lengths. The long grass is not so much of an issue if they free range and eat it, more in the case of it being picked and put in their coop.

Table scraps
Table scraps should not make up the majority of their diet, as it is not nutritionally balanced. Try to avoid feeding large amounts of citrus and onion scraps to them, as often they won't eat them. Also avoid putting meat bones or large amounts of meat/meat fat in, because they may attract rats.

Chickens do enjoy meat, especially raw mince but keep as more of a treat or if they need a protein boost when they are moulting or not too well. I also advise standing back when giving them meat...most chickens will go bonkers over it!

Water
Fresh water should always be accessible to the chickens. It is often a good idea to have more than one water container, should they knock one over.

Shell Grit
Shell grit is important for chickens to keep up their mineral intake, particularly calcium for egg laying. A lack of calcium can lead to very thin shelled eggs or even shell-less eggs being laid. Shell grit can be added into their feed, or placed into a container where the chickens have access to help themselves.

Bandsaw Dust
Sourced from butchers, bandsaw [or bone] dust, is essentially crushed raw bone. It's extremely beneficial in small amounts given regularly as a source of protein and calcium, especially when chickens are going through their annual moult.

Apple Cider Vinegar
Apple cider vinegar is used as a general tonic and natural worm control. It is most commonly added to the chicken's water supply-1 teaspoon per litre of water. 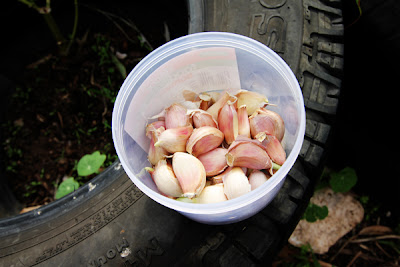 Garlic
Garlic is often used as a natural control for worms. It helps build a resistance to worms and can work as a natural wormer if the worm burden is light. Most commonly garlic is crushed and added to their water, but can also be put in mash mixtures.

Yoghurt
Full of beneficial bacteria, yoghurt will help boost the good 'gut flora' [bacteria] in the chicken's digestive system. Particularly useful if a chicken is not well or after a course of antibiotics-which not only kill of bad bacteria but the good ones too. It can be fed alone, in mash or mixed with table scraps.

Molasses
Put in their drinking water, molasses will give chickens an energy boost. Particularly useful for stopping broody hens being broody. 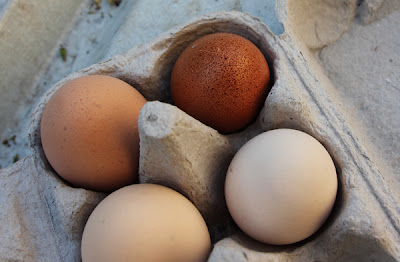 Eggs and Egg shells
Probably one of the more controversial foods to feed chickens. Feeding eggs and their shells provides a good source of protein and calcium [from the shells]. It's also a good use for eggs that are too old for human consumption or need to be withheld due to medication or antibiotic use instead of wasting them.

Some people believe it can give chickens the taste of eggs and will lead them to egg eating, others don't. I guess it really depends on how you feed it to them. Boiling them whole and then mashing them is one way, smashing the eggs and mixing it into a slurry with veggie scraps or adding crushed shells and beaten eggs to mash would be some ways to 'safely' feed eggs back to the chickens without running a risk of them developing unwanted egg eating habits. I would avoid smashing eggs open in their run for them to eat.

What NOT to Feed Chickens.
This is always a relatively subjective area. I've had chickens eat things they "shouldn't" and been fine BUT that's not to say that one day it might affect them and make them sick.

Citrus Peel-chickens don't really eat it and it doesn't rot down too well in their pens
Onion skins-same as citrus peel
Corn cobs-full corn cobs are fine, but once empty they are of no interest to the chickens and do not rot away easily. They can also be hazardous to dogs if swallowed, causing intestinal blockages and expensive surgeries for removal.
Rhubarb Leaves-it's not advisable to let chickens eat rhubarb, but don't worry if they peck at the leaves of any plants you have-it is doubtful they'd eat enough to make themselves sick.
Oleander-All parts of the oleander is poisonous and I wouldn't recommend feeding it to them.
Meat Bones-nothing wrong with giving bones to them, just that they may attract rats if left in the coop too long.

I am sure there are more things chickens shouldn't have, but I cannot think of them at the moment!


Containers
When it comes to feeding my chickens, I'm not really very high tech. I use empty icecream containers for their feed or just scatter it on the ground for them to forage for. For their water I use a 12L hanging waterer from the fodder store to stop hay, dirt and poo getting into it.

There are dozens and dozens of styles and designs of waterers and feeders you can get for chickens. Some are simple and others are more complex, in the end the best one is what works for you and your chickens.

Just thinking about all the different designs I have seen and heard about, is making me think about doing a separate post on them.

Please excuse the lack of photos at the moment...it was almost dark by the time I started working on this post and darkness does not make easy photography.
Posted by Ravyk at 6:22:00 PM