Over the weekend I decided that our couch needed more cushions. It only had two!

With the help of some of my friends I came up with a list of cushions I am going to possibly make. This is the list:


Turns out that most of my friends are geeks. Which I guess is a good thing...because I am one too! This house is full of geeks and the way Ember is going, she'll be a geek soon too. So lets add to the geekiness with some geeky cushions!

First I decided to make a Pacman cushion. Easy right? Just cut a wedge out a circle, sew it up and stuff it? What could possibly go wrong?

Well...when I'd half stuffed the Pacman, it kind of resembled a giant yellow fortune cookie! 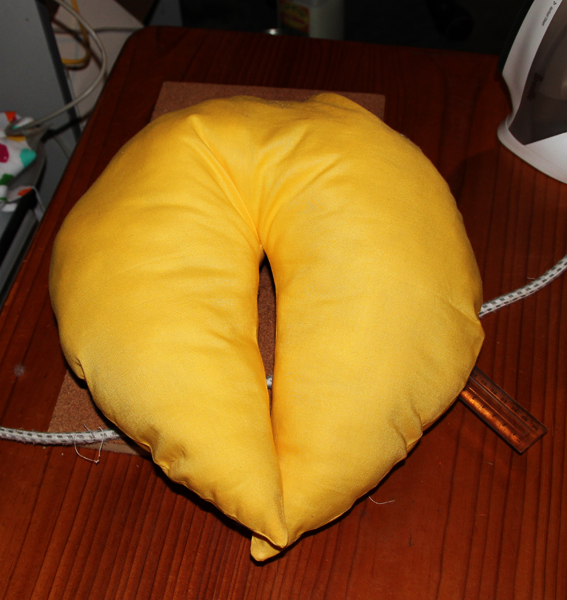 This really was not a good start...but I persevered until it was fully stuffed hoping it might look better then. But... it still looked like a fortune cookie! *Sigh* The mouth section was too long and pointy in relation to the Pacman 'body' and the mouth was definitely not wide enough.

I attempted to fix it by slip-stitching the points in on themselves to make a more 'blunt' mouth, which kind of worked to remove the fortune cookie look. Unfortunately it did not solve the 'not looking remotely like Pacman' problem. 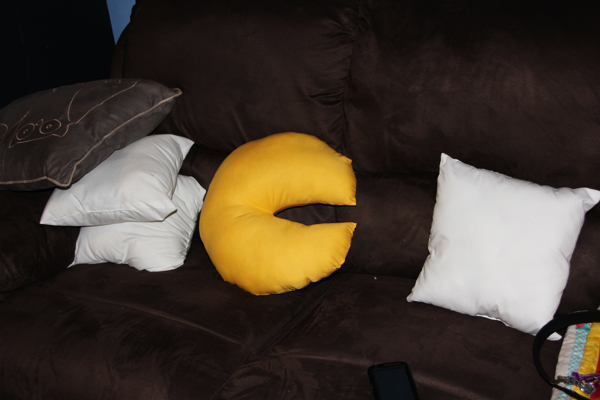 So now I have a yellow cushion that looks like a round of cheese with a chunk taken out of it...or a very fat fortune cookie. I think I might leave that for awhile and try something different.

Next up I decided to try a QR Code cushion using felt.

A QR Code for those who don't know, is basically a type of barcode. The QR code can be used for all kinds of things, from basic text to URLS and phone numbers.

I decided to keep mine rather simple, so I started off with Ember's name. I pieced it together out of felt bits which took a fair while. It looked awesome but came across one major issue. 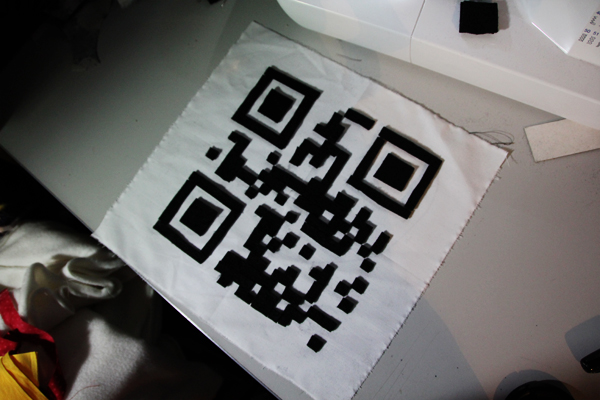 I couldn't get the felt QR Code to read with my phone! Mega fail. I think it was mainly to do with the shadows being cast on it from the lights. I scrapped the idea of using felt [I was rather relieved to be honest. I had no idea how I was possibly going to stitch all the pieces on without mucking it up!] and pulled out my best friend. A Sharpie!

I traced the QR Code outlines onto the white fabric and coloured them in. They turned out better than expected and they all read with a QR Code reader.


Close up you can see where the marker has bled, but they'll do for now. I'm thinking of getting them custom printed via Spoonflower.