Well the eggs are coming along nicely, only a few more days to go!
I did another candling to see how the development was going. All but two are going well. The two I’m not so sure about had a lot more yolk visable and weren’t as dark as the rest. I couldn’t see any movement either, so they are probably dead in the shell. The eggs will stay in the incubator until hatch day, just in case. 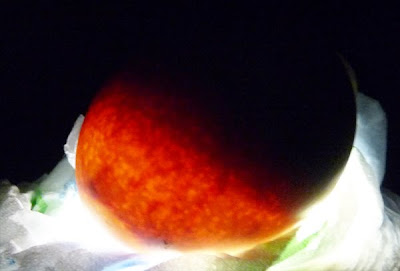 Dead in shell[?]. I can’t see any visable chick shape, but can still see blood vessels and a lot of the yolk. 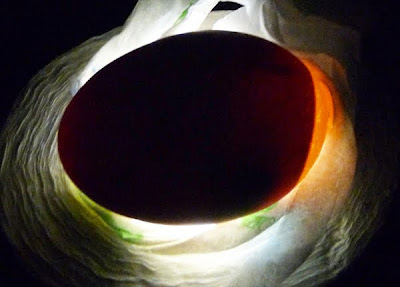 Well developing egg. The light section on the right end of the egg is the air sac.

The other possibly dead in shell. Its a real pity about this one if it’s dead, as you can just make out the chick inside. It’s head is in the bottom left corner of the egg with its beak pointing downwards.
Tomorrow is the last day to turn the eggs before leaving them until they hatch, which should be Sunday or Monday. Hopefully the next ‘Chicken Update’ will include some photos from the hatch day.
Posted by Rav at 5:20:00 PM